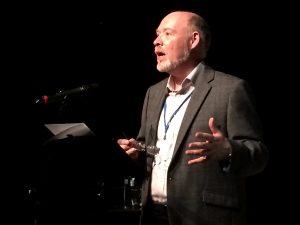 In collaboration with the British composer, Barry Seaman, Paul has worked on the restoration of several rare silent films, making them newly accessible to a contemporary audience (please see film projects), he has also introduced screenings of these and many other films in the UK, USA, Canada, Malta, The Czech Republic, Russia and Slovakia.

He has presented film screenings/programmes and lectures at The British Film Institute, The Buxton Festival, The State Museum of Theatre and Music (St Petersburg, Russia), Oxford University, Emory University (Atlanta), University of Pennsylvania, George Washington University, The University of Cincinnati and The Library of Congress (Washington DC). He presented a series of film programmes for Seattle Opera as part of The Ring Cycle, and for Canadian Opera as part of the innaugural season at the Four Seasons Opera House in Toronto.

In April 2012, he gave the Fine Arts lecture at the University of Regina, Saskatchewan, Canada; The Opera Singer and the Silent Film.

He has published widely as both an author and an editor, and his most recent books include Eleonora Duse and Cenere (Ashes): Centennial essays (with MariaPia Pagani) which was published by McFarland in Spring 2017, and a new collection, The Composer on Screen, published in Spring 2018. He worked with Anastasia Toros on a newly edited and annotated edition of a biography of Konstantin Stanislavski’s stage designer, Viktor Simov (Routledge/Taylor & Francis, January 2020). He co-edited with Nesta Jones a collection of essays celebrating the career and legacy of Clive Barker (Methuen Drama/Bloomsbury, March 2022), and is working on a collection of essays on Victorian Blockbusters (for McFarland, forthcoming in 2023).

In January 2013, he curated the exhibition, Stanislavski on Stage, at Pushkin House in London.

Paul is editor-in-chief of the journal Stanislavski Studies, published by Routledge/Taylor and Francis, and co-convenor of the international research project The S Word, which explores the influence of Stanislavski on contemporary theatre: the project has staged international symposia in the UK, Prague, California and Malta, and is currently planning future events in Prague, London, and Australia. Starting in 2021, Paul has worked with a number of colleagues on the creation of a new webinar series, which has also contributed to a new research website, Stanislavsky, Here, Today Now. He is the Series Editor of the new book series, Stanislavsky And… (for Routledge/Taylor & Francis).

In 2017, Paul collaborated with colleagues from Manchester Metropolitan University and the Conservatoire for Dance and Drama, to stage a new annual event, Practise, Reflect, Share, designed to encourage practitioner/scholars to write for academic journals. The PRS symposium presented its third event at The Guildhall School of Music & Drama, on Practice Research in November 2019.